Skip to content
Calling ALL Lions…
Are you ready to have some FUN!!
The Ravenna Lions are having a LARGE float in the upcoming Balloon A-Fair Parade…
But with our small size club- we’re split into running our booth, having the float and judging parade floats…we don’t have anyone to ride on our float.
Soooooooo can you spare an hour to come out and join us on our Lions float?
This would be a collaboration of Lions Helping Lions!
When: Sat. 9-18-21
Time 8:30am…parade starts at 9am
Location: Giant Eagle parking lot
909 E. Main St- Ravenna
Your Family, Kids, Grandkids are welcome to come out…wear your Lions gear!
Questions or to sign up…call/text Lion Jill Reitz

With the Regional Lions Leadership Institute and a Guiding Lions course in the near future, many opportunities to grow in Lions!

Read on in the Newsletter to learn more.

Rootstown Lions Club Sip-N-Paint as well as a Chili cook-off in October.

The JDRF walk will be here soon.  Hosted at Camp Ho Mita Kota, where you can see the camp first hand!

The July newsletter is now available.

Check out all the new faces!

The Delegate and Ballot Voting Certification Committee communicated various times via electronic format and gained results of the recent District Election for the positions of District Governor, Ohio Lions Finance and Planning Representative, and Ohio Lions State Building Trustee. Out of a total of 88 delegates that were certified to vote; the committee tabulated 25 votes from Club Delegates and 9 At Large Delegate votes to calculate a 34 total delegate votes. The votes for all three positions were unanimous.

As District Governor, you asked District Parliamentarian to oversee the election process and approved the recommended/appointed Delegate and Ballot Certification Committee consisting of PCC/Parliamentarian Chuck Allcorn, PDG/CS Jim Ferritto, and PDG Michael Tyler. The process of collecting votes was no different this year as compared to last year. The lack of “in person” convention (still) made it difficult. However, the Committee certifies these 34 total votes to be accurate and true. If anyone wishes to contest these votes they may do so under LCI’s Constitution and Bylaw; StandardForm. Please contact the committee members.

On behalf of the committee; serving in Lionism

*In honor of the Governor’s project, please bring new books to be donated to the Children’s Hospital

Registration Cost: $25.00 for each Lion/Guest.
Leos are invited to join us from 11:00-1:00 for lunch at no cost and work on a joint Lion/Leo Service Project.

Price includes: Lunch, Dinner, Beverages, along with a day of Service, Recognition, Learning, Fun and Fellowship! 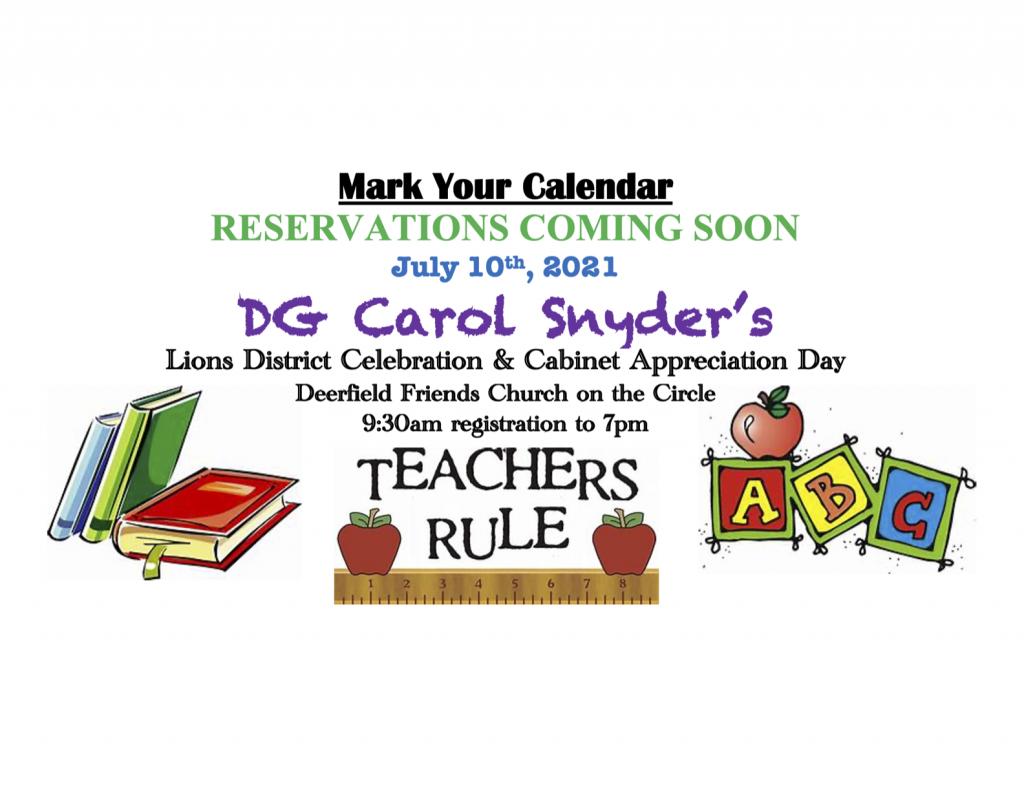 The May Newsletter is here!

And not a moment too soon as activities are starting from day 1.

Read all about it and catch up with previous Newsletters

Let me get back to reading the latest newsletter!

Ohio Lions District 13 OH-4,
District Governor Carol Snyder is sad to announce that Ohio Lions District 13 OH-4 Convention scheduled for April 9, 10, 11, 2021 in Akron, Ohio has been cancelled due to COVID-19 pandemic. Currently there are no plans to reschedule the convention to a future date, but there may be other events in place of the convention during the upcoming summer months. Please watch for mailings, emails, and the Lions OH-4 Newsletter for potential future events.

Ohio Lions District 13 OH-4 Annual Business Session will be a virtual event on April 10, 2021 starting at 10am. It is important that clubs complete the enclosed registration and delegate forms, and return to PDG Ron Clifton, 302 Ewing Road, Youngstown, OH 44512 or email: ronaldclifton@zoominternet.net by March 22, 2021.

All clubs are asked to consider donating to the twelve (12) Parade of Checks that are listed in the Ohio Lions District 13 OH-4 Directory 2020-2021. Please mail all checks directly to PDG Ron Clifton, 302 Ewing Road, Youngstown, OH 44512. I will forward all the checks received to the District Chairs of each parade of checks. It is important that the Lions work continue especially during the tough times of this COVID-19 pandemic.